Here’s a shock: not everything in the movies is true. But these five documentaries offer interesting insights into the Internet and its people.

Non-tech people tend to consider coding, hacking, and anything remotely dev-y as mysterious and magical processes. This myth is helped along by the movie industry, and there’s nothing wrong with that. Movie watchers generally like thrilling, action-packed stories, and coding can be anything but exciting.

But not every good movie needs to be filled with action; some get our brains going by presenting new ideas or interesting viewpoints. It’s worth it to see a movie that’s a bit more grounded in reality, especially if you want to learn about something that directly impacts our lives.

With that in mind, I recommend checking out these five web-themed documentaries. Have you’ve ever wondered about the backstory of the Internet or asked where all our personal data goes? You’ll find out.

We Are Legion: The Story of the Hacktivists

Even though we basically hand our data to various companies, being hacked may be one of the worst things that can happen to us. Yet, we love reading about hackers. Their methods may strike as a doubtful and we may not agree with their moral outlook, but it is fascinating to watch what they can do for what they believe is right. This type of hacking sometimes serves as a protest or a way to draw the attention of the media. Sometimes it aims to leave more lasting damages “for the greater good” – as some of the hackers firmly believe.

We Are Legion: The Story of the Hacktivists focuses on attacks conducted by Anonymous, one of the most famous hacker groups. Sometimes it is hard to weed out exaggerated or false information, especially surrounding a group that hides their identities and likes to be perceived as omnipresent and powerful. However, I think that this documentary does justice to Anonymous by taking the facts and presenting them in an interesting way. It also shows that this group has earned their place in Internet history, creating a specific culture of anonymous, united action against different forms of oppression.

The Guy Fawkes mask that now symbolizes Anonymous can also be treated as the idea of the anonymity of all Internet users. It makes me think of a tacky-yet-fitting quote from the movie V for Vendetta: “…and ideas are bulletproof”.

The Internet’s Own Boy: The Story of Aaron Swartz

The late Aaron Swartz did what he loved, and his life is profiled in the documentary The Internet’s Own Boy. During his tragically short life, he was a genius software developer, an Internet activist, an entrepreneur, and a writer. You’ve almost certainly used his creations or projects he took part in, such as Markdown and Reddit. As a teenager, he participated in the creation of the RSS web feed and was active in the early stages of Creative Commons. Sounds impressive, doesn’t it?

This documentary is narrated by the people who personally knew Aaron; it is more the story of a good friend than a bare-facts documentary. After viewing it, I was left with thoughts about fragility and the world we live in. There is no happy ending in this movie, but learning about a very special person is worth the sadness. Aaron’s story inspired me immensely.

Before the true torrent era, there was Napster, a P2P file sharing service. Napster could be called a milestone in Internet history. It was launched in 1999, and at its peak it had an astounding 80 million registered users. This was in 2002, when the Internet (and the whole concept of downloading) wasn’t as popular as it is today. Napster focused on sharing mp3 files and was particularly popular among students. Unlike Pirate Bay, it didn’t stand the test of time and its original incarnation was shut down by court order. (Currently, Napster is the name of a for-pay music streaming service.)

Downloaded: The Movie tries to tell the original Napster’s story from different perspectives. It features interviews with software developers and people from the music industry. If you’ve ever wondered about streaming before the torrent era, this movie is a good way to find out.

TPB AFK: The Pirate Bay – Away from Keyboard

If you’ve heard about torrents, you’ve also heard about the biggest and most (in)famous torrent site – The Pirate Bay. This movie tackles a can-of-worms topic: downloading files from the Internet. Its main focus is the people who founded the website and the legal trials surrounding it.

In 2008, three founders of Pirate Bay – Fredrik Neji, Gottfrid Svartholm, Peter Sunde – and Carl Lundström, a businessman who sold services to the Pirate Bay website, were tried in Sweden for promoting copyright infringement. The documentary has many clips from the trial, interspersed with a commentary from the founders of the site. It wasn’t an “eye-opening” movie for me, but I consider it to be a good brief of what Pirate Bay is and what it does. It also highlights an important fact: whether we like it or not, downloading files is and always will be possible on the Internet. Trying to close down individual sites won’t change anything in the long run.

Fittingly, TBP – AFK was distributed free of charge in every possible online way – you can watch it on YouTube, download it from various torrent sites (obviously), or buy a DVD to support the filmmakers.

Facebook is a great example. Everything you share, write, like, or link to your account is freely gathered, analyzed, and used by the company. You yourself agreed to that by checking that little “I agree…” box. The worst part is that it does not matter whether a few decide to disagree and not register on a website. The majority checks the box; anyone who doesn’t is so much a minority that they are like a drop of water in an ocean. Freezing your Facebook account and switching to a non-tracking search engine (and so on) does not really matter; it would mostly be to your own disadvantage. There is not much that one person can do about it.

The above paragraph is a summary of Terms and Conditions May Apply. It is not a fast-paced, action-packed movie. It does not tell you anything revolutionary or new. If you weren’t aware of the fact that your data is gathered nearly everywhere on the Internet, it may leave you with a darker view of reality. Yet, it is a movie worth watching.

In my opinion, you should take the information presented here with a grain of salt but seriously consider the overall message. If this documentary makes you a bit more wary and inquisitive before signing anything, then it has fulfilled its purpose.

What about you? Got any tech- or Internet-themed documentaries to recommend? Share them in the comments section. Thanks!

Why I Choose Learning Apps … And You Should Too 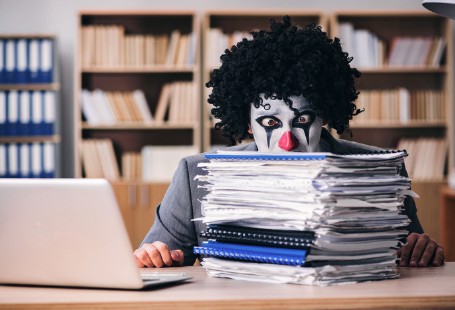 Why I Choose Learning Apps … And You Should Too